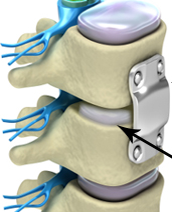 The Anterior Cervical Discectomy and Fusion is a surgical procedure is done to relieve neck and arm pain caused by a herniated or diseased disc pressing on nerve roots or the spinal cord. This is accomplished by removing the damaged disc to decompress the spinal cord or affected nerve roots.

Using minimally invasive spine procedure, a small incision is made on the front of the neck and the disc is removed through this incision. A minimally invasive fusion is then performed, with bone graft being placed in the open space where the disc was to keep the vertebrae from collapsing. This procedure sometimes requires a small metal plate to be attached over the area to increase stability as the bone graft knits together with adjacent vertebrae during the healing process.

Schedule A Consultation Today! Get Started