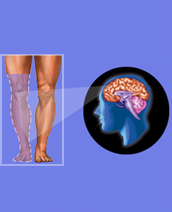 Phantom limb pain is pain that feels like it’s coming from a body part that’s no longer there. Doctors once believed this post-amputation phenomenon was a psychological problem, but experts now recognize that these real sensations originate in the spinal cord and brain.

Although phantom pain occurs most often in people who’ve had an arm or leg removed, the disorder may also occur after surgeries to remove other body parts, such as the breast, penis, eye or tongue.

For some people, phantom pain gets better over time without treatment. For others, managing phantom pain can be challenging. You and your doctor can work together to treat phantom pain effectively with medication or other therapies.

Most people who’ve had a limb removed report that it sometimes feels as if the amputated limb is still there. This painless phenomenon, known as phantom limb sensation, may rarely occur in people who were born without limbs.

Phantom limb sensations may include feelings of coldness, warmth, or itchiness or tingling, but should not be confused with phantom pain. Similarly, pain from the remaining stump of an amputated limb is not phantom pain. By definition, phantom pain feels as if the pain comes from a body part that no longer remains.

Characteristics of phantom pain include:

Call us or fill out this form and we will call you.
Schedule A Consultation Today! Get Started