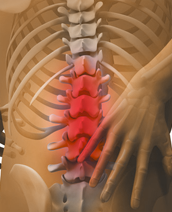 Failed Back Surgery Syndrome (FBSS) refers to a subset of patients who have new or persistent pain after spinal surgery for back or leg pain. The pain can be reduced but still present, or may get worse within a few months after surgery due to a buildup of scar tissue around spinal nerve roots, along with persistent tissue pain and muscle spasm. The term refers to a condition of continuing pain and is not meant to imply there was necessarily a problem during surgery. While published reports estimate the incidence of failed back surgery syndrome to be between 20 – 40%, the likelihood is considered greater with repeated surgery, and the condition will be more prevalent in regions where spinal surgery is more common.

Initial treatment may involve injections, nerve blocks, or a treatment to temporarily block pain signals called radiofrequency neurotomy, which heats up small nerve endings and temporarily blocks the pain. In addition to those pain relief measures, an exercise program to gradually recover muscle strength may also a component of a recovery program.

If the pain is disabling and does not respond to initial measures, neuromodulation treatment may be an option. Electrical neurostimulation can be tried out, in which one or more leads with small electrical contacts are placed near the nerves (such as the spine or the peripheral nerves beyond the spine along the lower back). If pain is reduced during the trial, a small battery, similar to the device used to power a heart pacemaker, is implanted to provide ongoing stimulation.

Large, carefully conducted clinical trials have shown spinal cord stimulation to have superior results, at lower cost, than repeat back surgery for the treatment of FBSS.

Another neuromodulation treatment option is intrathecal drug delivery. Rather than rely on medication taken by mouth, this involves placement of a catheter that delivers pain medication directly to the affected area, requiring less medication and causing fewer side effects.

Schedule A Consultation Today! Get Started